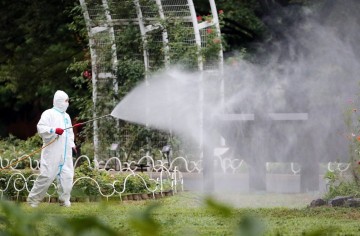 Tokyo’s Yoyogi Park in June.  It’s overcast.  The grass is usually damp.  It’s hardly the place to be.  Those who go there kind of wish they could be somewhere else.  Therefore, conditions were perfect for the first ever New Zealand Festival in Tokyo which was held on the weekend. 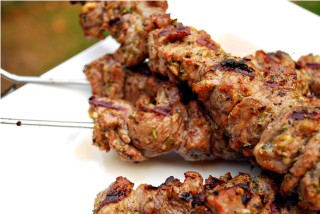 Lamb! Lamb! Lamb! The great Kiwi dish.  And there was lots of pavlova to go around to complete the traditional Kiwi meal.

Even before entering the park, festival goers were greeted with the inviting aroma of roast lamb and traditional Maori fare.  Head Chef Craig Sneddon happily spruiked the mouth-watering choices, “We`ve got a range of fine food here from all corners of the country.  I tell you – you wouldn’t find this quality at other festivals, such as the one the Australians put on.” 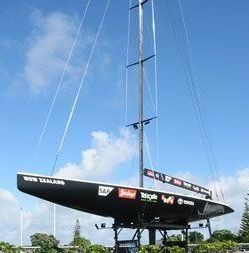 The legendary Black Magic on dry land, where it belongs.

Rugby obviously plays a big part in Kiwi culture, but it was the America’s Cup winning yacht Black Magic on display which caught the attention of most people.  “Besides the USA, New Zealand is the only Pacific Ocean nation to win the America’s Cup and defend it successfully,” explained boating enthusiast Hamish McKechnie, before he added, “That’s because Australia lost it straight away.” 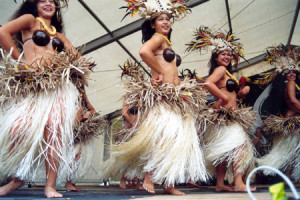 Many in the crowd freaked out when they saw women, rather than A-cup girls, dancing on stage.

Transporting the yacht through Tokyo and into Yoyogi Park must have been a logistical nightmare, but then nobody beats the Kiwis for sheer bloody-mindedness.  Don’t forget, that when you are looking at a white New Zealander, you are looking at someone whose ancestors not only chose to sail around the world to live on an island with perhaps the scariest natives in history, but then got together with said natives and volunteered for the really, really, dangerous missions in two world wars.  And don’t forget, that when you are looking at a Kiwi of Maori heritage, you should probably stop it before they make eye contact. 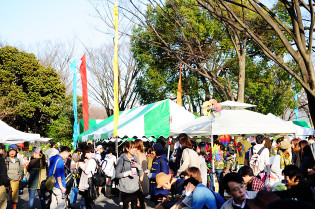 Festival goers appreciated the DJ’s mix of songs by Kiwi bands such as Crowded House and 30 Odd Foot of Grunt.

The festival site began to look a little sleepy and desolate in the afternoon, which reminded the Dunedin folks of home, but that was before the Ram-It-Up ’15 Mega Dance Party kicked off.  Young ravers, many who appeared to be off their tits in a big way, brought an almost tangible energy to the festival.  Nick Edgar, from the non-government aligned New Zealand Narcotics Awareness Organization, mingled with the sweaty throng while giving helpful tips, “Try to hide the smell of hash by lacing your joints with speed.  You should always knock back a few shots of whiskey too.

“While weed is illegal here in Japan, the cooler cops just turn a blind eye.  Some asshole cops will confiscate your stash, but that`s where it ends.  I’ve seen people from South America and Africa getting a hard time, however Americans can just show their passports.  The cops will back off then, so they can do whatever they want.  Therefore, I tell the all the Kiwis to party with a Yank so they can carry their stash for them.” 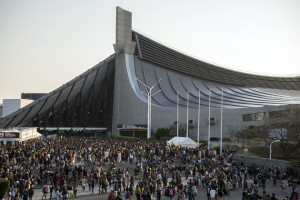 That’s a huge crowd, but they`ve just seen a concert at the adjacent National Gymnasium, and have no interest in the festival.

Festival Organizer Rachel Coney said that the modest turnout was still encouraging.  Coney, whose friends all live in Sydney these days, explained that the numbers were in fact good when you consider the size and population of New Zealand.  “There are more people in Shibuya at Halloween than in the whole of Auckland.  More than anything, we’ve successfully shown Japanese people that there’s more to NZ than just sheep and rugby, although only a little bit more.”