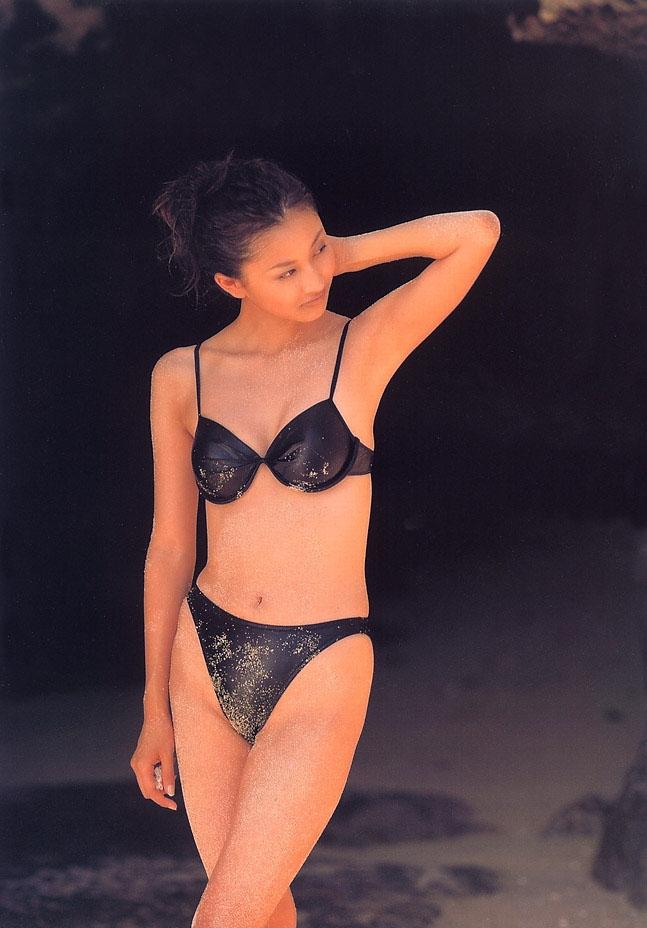 Beautiful Rei Kikugawa in the shot which served as a wake up call to an entire industry. In the past many a photo shoot was ruined due to the failure of crews to brush sand away from areas of importance.

When it comes to looking for work in the modeling/fashion industry, it’s almost always a case of “it’s who you know”.  But Richard Wadd and Tittie Felch of renowned Tokyo modeling agency Wadd & Felch are keen to take on an outsider, and they’ve turned to us to assist in their search for a new employee.  Tittie was more than happy to sit down for a Q & A session with us last week to go over the job requirements.

The job being advertised is for a “Sand Remover”.  Can you tell us a little more about this position?

Among other things, it involves brushing sand from models’ skin and bikinis.  In the past, many a beach shoot came to nothing due to oiled-up models lying in the sand and making a mess of themselves.  Some agencies went to the wall when fans were left dissatisfied and sales suffered.   Sometimes sand ends up in delicate areas and models complain that the sand remover’s hands are “lingering”, but I just tell them to roll with it.  I tell the models that plenty of others would be prepared to put up with that kind of harrassment.  That usually shuts them up.  We’ve basically got a grey area which has developed.  I mean, one model’s dirty pervert copping a free feel could be another model’s diligent sand remover.

Haruka Ayase enjoying a day at the beach.  Sand creeping into an exposed cleavage is a risk that models are well aware of these days.

You mentioned “other things”… ?

Perhaps I should explain.  Sure, there are a couple of bright sparks amongst them.  But most of the models we deal with couldn’t tell you what the capital of Singapore is.  They have no creative talent.  When they appear to be in the throes of ecstasy, it is because they actually are in the throes of ecstasy.  They don’t have the ability to fake it.  They don’t have the imagination to diddle themselves either.  As the French would say, they have a lack of imagination erotique.  So we need someone on set to get down and put their tongue to good work.

Some people might consider that, all up, it’s a heavy workload.

In the past we had one person for each duty.  So we ended up with lots of people standing around with clipboards and sipping latte.  Well … those days are gone.  If a candidate were to tell me that they were not prepared to get down between a model’s legs and put their nose to the grindstone, I’d just rip up their resume and tell them to stop wasting my time and get out of my office.

Can you tell us about the pay and conditions?

We want to attract the best and reward effort, so we are offering 500 000 yen a month, with health insurance, rental allowance, return airfare to your hometown each year, and four weeks annual leave.

Are you an equal opportunity employer?

Yes.  We tend to treat our models, both male and female, as pieces of meat.

Should candidates be aware of any other pertinent information that we may have missed?

Look … it`s not glamorous, but it’s a role that’s becoming more and more indispensable in today`s topsy turvy world of modeling.  If you think you’ve got what it takes, send me your cv.

Those interested can also send their applications to The Japan Wanko.  Please mark e-mails to the attention of either Richard Wadd or Tittie Felch.