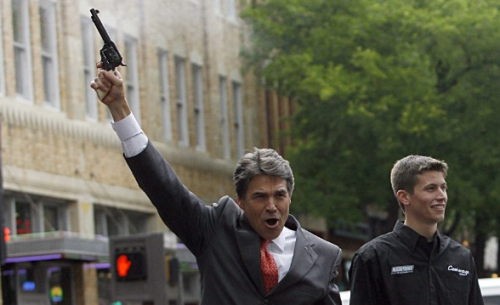 It was back in the summer of 2011 when Christians were called to attend a special prayer rally at the Reliant Centre in Houston, Texas.  Many readers may remember that the rally generated a lot of controversy and ridicule, mainly because of the purpose of the event, and the organizer.  The purpose was to pray for economic recovery, and the organizer was the Lone Star State`s colorful political leader, 63 year old Rick Perry.

The prayers of some 30,000 people who were in attendance that day have largely gone ignored, with the American economy limping on like an old man with a limp going for a slow stroll in a park which has many things worth stopping to look at.

But Governor (Future President?) Perry had always remained hopeful of the prayers being answered, and he was finally able to announce that there had been a sign of recovery, albeit across the Pacific, and then only a small sign at that. 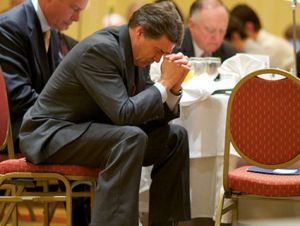 Governor Perry praying for the peace, love and economic growth

As news of Japan`s economy inching its way out of recession hit the financial pages last month, Governor Perry leapt on the tiny, really tiny, percentages to announce that he had had a hand in it.  Sprouted Perry, “The rally wasn’t about the US economy per se, it was just for . . . you know . . . a general economic recovery.  And when I mentioned that we should remember our loved ones overseas, I wasn’t necessarily talking about our servicemen and women in Afghanistan, I was thinking more about our major trading partners, like the Japanese, who we love.”

Perry`s comments came at a time when the Japanese economy is still far from out of the woods.  Indeed, the yen is close to collapsing in on itself  in the manner of an old building being demolished by an expert demolition team.  Nobody wants to see this happen, especially Governor Perry who would, given his assertion that his prayers have helped the Japanese economy, look like a clown.  Not a funny clown either.  He’d look like a clown desperately tripping over a rope for a laugh.  Or a clown with whom the kiddies would be too scared to have a photo taken.

It remains to be seen whether Japan will become a modern day Oriental Weimar Republic, but if it goes down, it’ll be in spite of new buddy Perry’s best “hands across the water” efforts.  “The American South and Japan have a lot in common,” explained a straw clutching Perry.  “For one thing, we’ve both had our butts kicked by the USA.  The Japanese got theirs kicked in the 1940’s, while we came off second best as part of  the Confederacy in the 1860’s.”