We came across Shixi when we were trying to monitor dolphin movements in the strait between Japan and Taiwan.  Shixi, a 1.8 meter long bottlenose, shocked us when he approached us and began communicating via our state-of-the-art submicrophonic equipment.

While taking extra special care to stay on the Taiwanese side of the maritime border (and the times must certainly be interesting when sentient beings choose to be closer to Taiwan) Shixi gave his informed views on the annual Taiji slaughter.

Said Shixi, “I think I speak for all dolphins when I say that we need to take charge of things.  Those self-righteous American hippies and Australian surfers in Taiji have really helped us by drawing attention to the slaughter, but now it`s our time to do something.  And it’s probably time that those Yanks and Aussies went home and tried to get real jobs too.” 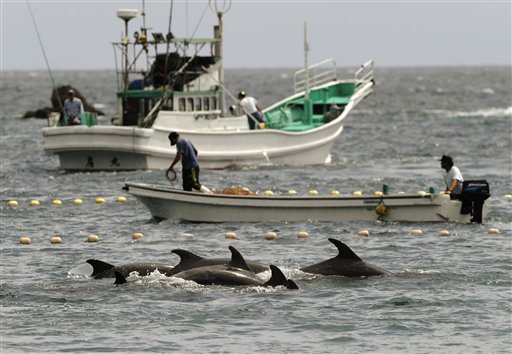 Not so happy times for these dolphins

Since the movie, “The Cove”, shone a spotlight into a dark corner of Japan, many people have raised their views. But Shixi has been the only dolphin so far to get his opinions across.

“We want to hit back and strike a blow against the butchers.  I suggested that we form a pod of 100 or so, then move quickly in a circular direction around one of the boats.  This would create a kind of whirlpool effect and leave the fishermen on board slightly disoriented.  Then the men would be too bamboozled to hunt us.  We would have to do it one boat at a time though, so most of the fishermen wouldn`t be feeling dizzy at the same time.”

As much as we were warming to Shixi, the more we listened to him the more we realized that his ideas could only be compared to the ultimately unsuccessful “Mouse raping an elephant” style Polish tactic of getting someone to put Hitler’s hand in lukewarm water while he slept.

Displaying an incredible understanding of the 24/7 News media zeitgeist, Shixi then revealed his strategy for the court of public opinion, “More feasible is our day of community action.  Perhaps you journalists could arrange a helicopter to fly overhead while we arrange ourselves into the shape of a giant question mark.  That would send an incredible message to the fishermen, and also the world.

“Failing that, we could use a trick that worked for Flipper; we could approach the fishing boats and splash the fishermen by using our tails.  Dripping wet and demoralized, the fishermen might return to port…or they might just scratch their heads, shrug and then herd us toward that cove.”