M. Hardwick on 2013年8月5日 — Leave a Comment
Following the success of festivals organized by the Thai, Jamaican and Indian business communities in Tokyo, it was the Land Down Under’s turn to be hosts yesterday, as more than 20 000 people descended on Yoyogi Park on a blazing hot day. 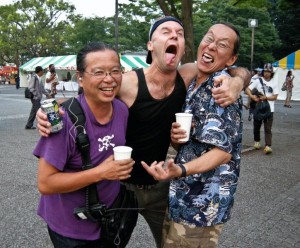 Entertainment was provided by a young white musician who was wearing a red, black and yellow t-shirt with the word, “sorry”, emblazoned across it.  The 45 minute didgeridoo performance drew tremendous applause although, given the obscureness of the instrument, most people couldn’t tell if they were witnessing a virtuoso performance or simply a guy making fart sounds by blowing into a hollow piece of wood.  One audience member told me that he wasn’t sure if the t-shirt was a statement regarding treatment of indigenous people, or an apology for the performance. 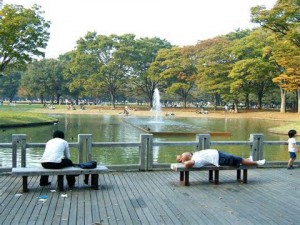 In keeping with the tone set by the entertainment, the food was decidedly minimalist, which saw festival goers being a little underwhelmed by the culinary offerings.  The most exotic kind of food was a grilled sausage served on a barely buttered slice of bread with burnt onions nestled either side.  Chef-for-the-day, or “Barbie Bastard” as he jokingly described himself, Jack Murray, was quick to defend the food when it was suggested that it was pretty lame when compared to the churrasco served up at the Brazilian festival the previous weekend.  Speaking to local reporters through two interpreters (Aussie Ocker to English, then English to Japanese), Murray explained the innate magnetism of the “great Aussie Barbie”.  Said Murray, “Mate, it’s a barbeque.  It’s not some kind of fancy a la carte bullshit.  And anyway, the folks get a choice of tomato sauce or barbeque sauce, so it’s still a great taste sensation.  Here you go.  Shut your trap and get one of these babies into you.” 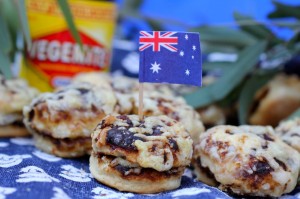 This finger food tastes about as yummy as it looks.

Lots of punters enjoyed the chance to wash down their simpleton lunch with a cold Fosters, a beer which boasts a taste thinner than Budweiser.  Observing a group of Australians imbibing, 24 year old Chitsuga Itai wondered whether it was the law in Australia to drink prodigious amounts of beer at social gatherings.  “There are white guys everywhere getting smashed.  Look at that guy over there.  He carries his beer around like a security blanket.  He looks really unsure of himself when he doesn’t have one in his hand.” 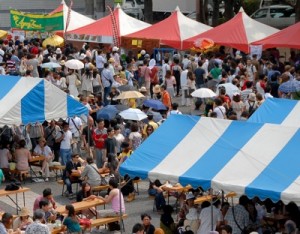 Most of the pale Aussies spent the entire day under cover

These Yoyogi Park festivals are usually a good chance for young people to fraternize, and the Aussie Festival was no different.  Pasty white guys claiming to be heirs to large sheep farms were seen trying to chat up the local ladies.

“Gimme a future anywhere but Japan,” exclaimed 28 year old passport hunter Hadaka Narimasu, who had come all the way from Shizuoka to try and snare a potential life-partner.  “I think I’ve met every Aussie stereotype here today.  I`ve met scuba divers, outback survivalists, surfers, and marijuana enthusiasts.  But, you know, they’re actually all dorky looking pasty white English teachers.  One guy who claims to be a surfer has spent the whole day in the shade, scared of getting skin cancer.  I think I might try focusing on guys from Canada again.  I mean, sure, they might sound like whiny Americans, but at least they don’t set out to emulate Russell Crowe.” 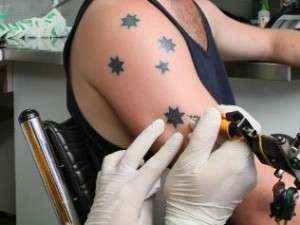 Nagano native, 27 year old Rika Oroba has worn out her welcome with the Australian Immigration Department after years of backpacking, quasi-studying, and fruit picking.  She’s gone through two student visas and two working holiday visas.  That leaves her with only one realistic option for getting back into the country long term – find a hubby.  But desperate Rika also had reservations about the quality of Aussies on offer, “Every guy I’ve talked to says that his family has a cool beach house near a secluded beach that only locals know about.  Come on!  Do these guys think lies like that will help to get me to a love hotel?  It takes more than that to get my knickers off.  But only a little bit more.” 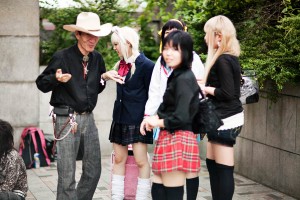 Akubra it ain’t: These Harajuku girls didn`t have the heart to tell him that he had picked out the wrong hat.

Contempt for the Australian guys wasn’t exclusive to the Japanese women, however, as Festival Co-organizer, 38 year old Sydneysider Penny Band joined in the chorus of ridicule.  “Some of these guys are pathetic.  I mean really sad and pathetic.  I just overheard that guy in the yellow shirt (Band points to an inebriated man wearing a Socceroos shirt) telling a young woman that he’s a scuba diver from Cairns.  Just take a look at the guy.  He’s whiter than those Russian hostesses that you can see in Roppongi.”

So, will there be another Aussie Festival next year?  “Well, that’s the beauty of having an event in such a large city,” explained Band.  “We’ve set up a festival in a space in the middle of the city with some flags, southern cross facepaint and mediocre entertainment.  And we`ve sold the kind of food and drink which leaves a lot to be desired.  The fact is that no matter how shitty the product, you’ll still get thousands of punters drifting through, willing to part with their money.  Yeah – we’ll be back here again.”