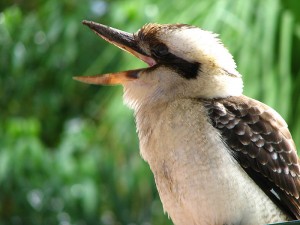 A rare picture of the rare Norfolk Kookaburra

A young Australian traveler is recovering today after a kookaburra smuggling operation went horribly wrong at the Narita Airport arrival gate on the weekend.

27 year old Paul Bradley, from Collaroy on Sydney`s Northern Beaches, suffered eye-wateringly painful wounds after a kookaburra, which had been drugged and stuffed down his boxer shorts, woke up two hours earlier than expected.

According to witnesses, Bradley began screaming in agony whilst standing in line at customs.  It then became apparent that a bird of some kind had woken startled, before ferociously attacking the flesh nearest to it – in this case Bradley`s crown jewels, which were left looking as though they`d been fed through an angry paper shredder.

He was quickly transferred to the Ushikome University Hospital, where doctors performed emergency surgery.  In a bizarre twist that he may not appreciate immediately, Bradley was actually fortunate that his private parts had been ripped to pieces in Japan.  Owing to the large number of mishaps involving fish knives, samurai swords and alcohol, doctors at Ushikome are renowned throughout the world for scrotum-repair surgery.  The fact that any of Bradley`s taddies are still swimming is testement to the polished skills of the team at Ushikome.

Bradley explained the lead-up to the mishap from his hospital bed, “A middle-aged man calling himself Mr Tanaka approached me at the beach one day.  He offered me return airfare to Tokyo, a week`s accommodation, and $10 000 to smuggle a rare Norfolk Kookaburra into Japan.  I gave the bird a sleeping pill which the vet advised would last the entire trip.  Obviously, we had to be careful with the dosage though.  But you can easily tell just by looking at the state of my blood encrusted boxers that we erred a little too far on the side of caution.”

Police have decided against laying any charges, on the condition that Bradley cooperates fully and allows the entire body of medical students unlimited access to his meat and 2 veg during his long road back to having some kind of functioning wedding tackle.