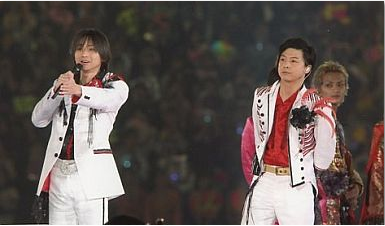 Kinki Kids – that’s Kinki with an “i”, as in the Kinki region of Japan

There were misunderstandings and confusion by the toy bucket load as Mr Children and the Kinki Kids kicked off their US Tour in Houston on Saturday night.

Many punters who were expecting an edgy night of hands-on, interactive entertainment were left bewildered by the J-Pop double act.  While there were some expat-Japanese and local Japanophiles in attendance, dancing to the hits of the 90’s, a huge number of middle-aged white men appeared to be frustrated, disappointed and increasingly bored.

The negative vibe produced by these men didn’t go unnoticed.  “I don’t know why they came to see a couple of J-Pop acts.  They didn’t show any signs of appreciation for Mr Children, who are the best Japanese band ever,” said 24 year old student Noriko Kato.

Some fans were keen to express their dissatisfaction with the event, although none would actually elaborate on exactly what kind of performance they had come to see.  Explained one 48 year old man wearing dark glasses, “Mr Children were a big let down.  At least the Kinki Kids had some cute little dancers.  They were far too busy dancing to make any eye contact with me though.” 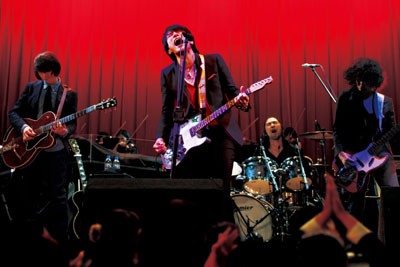 “I came here with my lips dripping in anticipation.  You know, I even refurbished my minivan just for the occasion.  I’ve got the interior looking like the inside of the space shuttle,” explained another gentleman as he wistfully removed candy from his long socks.  “I thought I might have been able to…umm…yeah…enjoy the evening.  Oh well…I guess I’ll just go home and browse my hard-drive.”

The general mood could perhaps be best summed up by a very downcast looking 42 year old wearing a Menudo T-shirt, “I didn’t pay good money to see a couple of Japanese pop groups.  I came to see…well…some other kind of entertainment.”