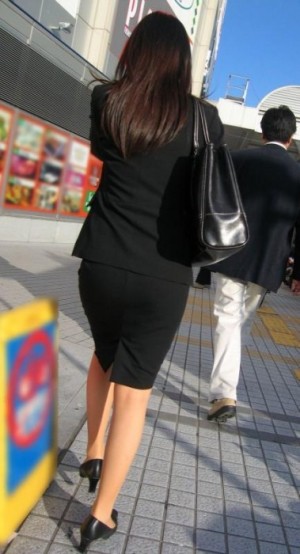 Tatami, a 37 year old Japanese-American from San Diego, has been bemoaning the fact that the black suit has been overlooked for years.  “I love spring in Japan.  We get to see the young hotties in suits which follow the contours of their just ripened bodies.  Sometimes you get a VPL happening too, which is great.  Winter can be a pain in the ass.  Women wear CFM boots and stylish coats which are nice, but they can be deceiving too.  I was stalking a woman last winter and ended up joining the same gym that she went to.  Well…what a shock!  When I saw her working out in her T-shirt and shorts, I discovered that she had the body of a 12 year old boy.  I didn’t give up on her though.  I simply broadened my mind and learnt to love her for who she is.” 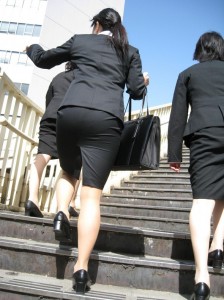 Veteran Saikyo Line Sex Offender, 53 year old Dokai, also expressed support for the recruit suit. “Sometimes I’ll see a cutie in her school uniform, which has a blazer and a pleated skirt.  Now, the problem with this combination is that it looks good, but you have no idea if that is covering a gorgeous peach-like ass, or a flat one like that of Tori Spelling from Beverly Hills 90210.  With a recruit suit, you know what you’re reaching for.”

Some companies are known to demand that the skirt must be a certain length above the knee.  This rule is welcomed by the likes of Dokai.  “In the chikan, or groping game, the risks are high.  I’ve been imprisoned four times.  Before I go the grope I want to know – is this worth the risk?  A recruit suit allows me insight that I wouldn’t otherwise have.  And if the young lady is sitting down I can sometimes get a peek up the V which forms between the legs and the skirt.  Whether she’s standing or sitting, the recruit suit grants me an opportunity.”

As both mainstream online bookstores and alternative bookstores wish to have nothing to do with Tatami and Dokai, the book shall only be available from the back of a van parked illegally in Kabukicho every other Saturday night during April and May, or until the authors have their arms broken by their unwitting models’ boyfriends.