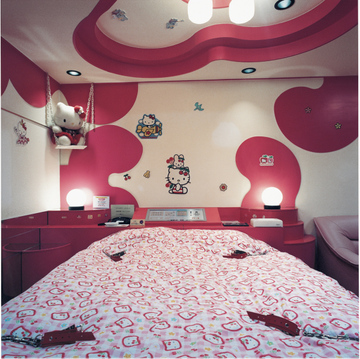 On location: This room`s atmosphere is usually perfect for those stepping into the spotlight for the first time

Japanese Adult-Video newcomer Ryoko Shimizu has managed to ruffle more than just a few feathers in her debut outing, “A Ticket To Ride”, with a rather sloppy performance before the cameras.

The most glaring faux pas was committed in the 20th minute of the video when 22 year old Shimizu thumbed her nose at one of Japan`s core pre-sex rituals; placing one’s clothes neatly to avoid unsightly wrinkles.  By simply kicking her knickers to one side after they had dropped to the floor, Shimizu displayed either a brazen disregard for the textbook, or a case of first-time nerves.  While it may have looked like a run-of-the-mill undressing to some, it was obvious to this seasoned viewer, as well as thousands of others, that something was lacking.

Former Adult-Movie star, 45 year old Asoko Nureta, whose big movies include “Ooh Long Tea Party” and “Umeda High School Girls In Trouble” observed, “Folding her knickers neatly and placing them on the night table would have been far more appropriate in this scene.  Those flogging off at home want to see filthy sex, but they also want to believe that the female character is a good girl-next-door who cleans her room regularly and doesn`t leave her underwear lying around.”

Knicker folding – not the most difficult feat to perform

But Shimizu’s laissez faire attitude towards her art didn’t stop with the knickers. For despite the video being filmed in a love hotel, no shower-before-sex-scene was shown.  Was there no need to freshen up? Perhaps one of the male counterparts was primed ahead of schedule, but surely the omission of a shower shows a lack of concern not only for her own hygiene, but for her partners’ too.  And the fact still remained; any sense of realism was damned by the skipping of a vag-cleansing shower.  Whatever the case, during the bukkake, or Dirty Sanchez scene, I was moved to suggest to my biscuit buddy that, compared to Shimizu’s level of hygience, the Sanchez was pretty clean.

Shimizu’s behaviour during the 3p scene also came in for criticism from Nureta.  “She paid more attention to her own feelings of ecstacy than to the feelings of the man kneeling in front of her.  Sure, she gave his member some oral attention, but she could have delivered a little more.  Where was the walnut?  Where was the gentle fondling of the scrotum?  Where was the attentiveness?  His needs could have been attended to with just a little bit of effort.”

Highly-experienced veteran AV performer Ai Uehara would never make any amateur mistakes in the bedroom, or the classroom, or even the park.

The Coup de gras came toward the end of the shoot, when a perhaps fatigued Shimizu allowed more than a few drops of semen to seep through her cupped hands, adding yet another stain to the already crusty sheets.  This point was defended by some young fans on an Internet forum.  One adolescent fan said that catching 90% in the hand was fine  because it was a tough job to achieve a 100% cup.  Another claimed that, “since all externally discharged spermatozoon will suffer the same fate, it doesn’t matter where it ends up.”

But that’s not what the experts are saying.  Nureta expressed sadness in that the cupping of the sperm was a skill that is sadly overlooked these days.  “Too often the girls in the (AV) industry forget that every sperm is sacred.  Thanks to the support of my father’s drinking buddies, I was able to perfect the cupping of the love juice.  I cherished all the gooey.  Today’s girls just put their palms together and hope.”

Had the cupping been pulled off perfectly, it may have made up for the earlier errors.  At the end of the day however, we could all see that while the little things add up to help distinguish the good actresses, they can also throw a spotlight on the ones who need a little more experience in the spit-roast department.