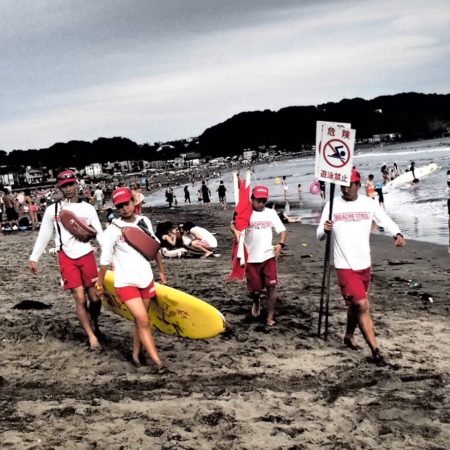 An exhausted and disillusioned surf lifesaving team go through the motions at a Kanto beach in August.

It’s a well-known fact that Japanese people have very ordinary swimming skills. Indeed, success in the Olympic pool can distract us from the Island Nation Water Sports Rankings (INWSR) where Japan comes stone motherless last *.  This has led to Surf Lifesaving teams at crowded beaches being overwhelmed and stretched to breaking point, as more and more people struggle to stay afloat in the ocean.

“This summer was the worst I’ve ever seen,” explains bronzed Aussie open water advisor Nathan Flanagan.  “Alcohol combined with water incompetence meant that we were pulling people out of the water all day everyday.  Some people damn near drowned, only to go back in five minutes after they were saved, and then get rescued again.  It’s a wonder we didn’t have mass fatalities.” 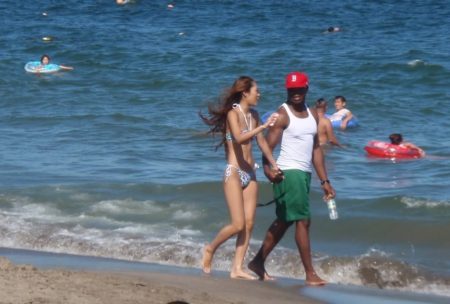 Some nervous female clients demand that their private rescuer hold hands at all times, even when on land.

This critical situation has resulted in business opportunities for strong swimmers from around the world, most of who have no other marketable skills.  These swimmers are now providing a service popular with the kind of people who struggle in any body of water larger than a bathtub.  Local beachgoers can hire a so-called private rescuer for as little as 1000 yen an hour, or 7000 yen for a whole day.

Genesis Bdago, a strapping 27-year-old Ghanian, says that young women in particular feel comfortable with private rescuers.  “My clients usually cling to their blow-up rings in the water.  They never actually swim per se.  They want me to stay close so that they can enjoy their day relaxed and carefree. 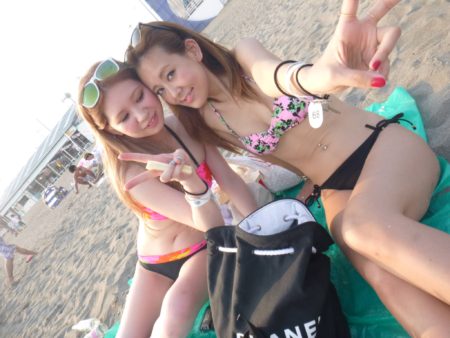 These young ladies look comfortable on land, but it’s often a different story when they get in the water.

“Bustier women like me to protect them from water gropings, where drunk idiots try to molest them.  These weirdoes are incredibly pea-hearted.  Not one of them will go near my clients when I’m around.  The worst was when a 19 year old hired me to protect me from a really creepy predator, who turned out to be her older brother.  Filthy.”

With summer long gone, life is tough for private rescuers.  Some are forced into picking up glasses in nightclubs or teaching English at unscrupulous organizations, but others manage to make their way to Okinawa where they can service holidaymakers, with the end-of-year period being particularly profitable. 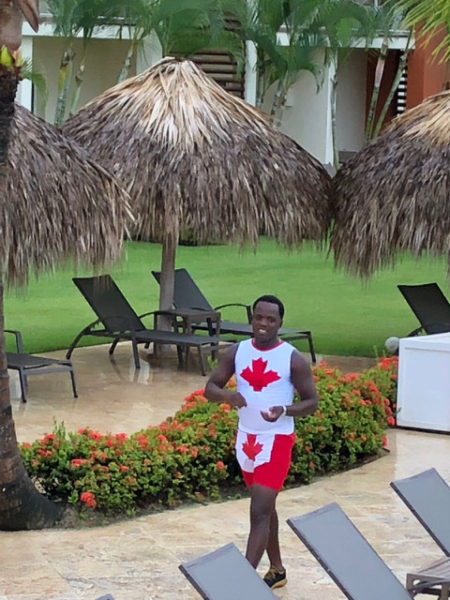 Some private rescuers show enormous pride in being from G20 countries to attract clients, who may otherwise be distrustful.

But while Okinawa’s tourist industry provides a small but reliable market for the private rescuers, misunderstandings are never far away. “Women seem to think that I’ll do more than just rescue them in the water,” says 35 year old Nigerian Daniel Yeboah.  “They expect me to treat them sweet and tenderly on land too, if you catch my drift. Most of the time it’s not possible anyway, given the size of the pussy here.  I don’t want to boast or anything, but it’s like trying to force a zucchini into a champagne flute.

“I find that, in this country, it’s only the really large women who can accommodate me without any overt signs of discomfort, and they rarely come to the beach.  But I’d definitely waive my standard hourly rate if I could link up with a woman with a lot of meat on the bone.  That’s what I’m into; pendulous breasts and an ass like two beach balls.  I can rock that all night long.” 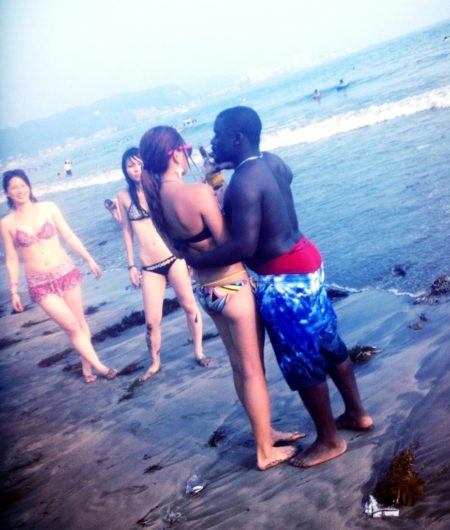 Frightened out her wits, this young lady has demanded extreme protection from her private rescuer.

As committed to saving lives as Bdago and Yeboah are, it’s painfully obvious that they (and their legion of fellow rescuers) are easy targets for harassment and exploitation.  As yet neither of them have insurance, nor have they been invited to join a union.  This is despite both being hired for the Miscellaneous Workers’ Union’s annual beach day in July.

Perhaps as a result of all payments being made in cash, the fledgling industry has so far gone under the radar of the authorities too.  Local government officials that I spoke to seemed unconcerned by the lack of regulations, but assured me that they’d start caring if an incident occurred sparking a scrum of TV cameramen to gather at the entrance to the building.

* Tuvalu is ranked first which, considering how much swimming they’ll be doing in the near future, is a good thing.