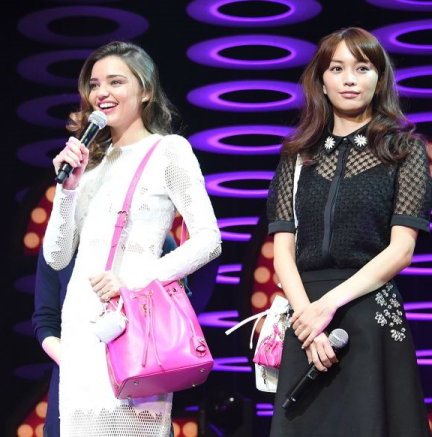 Western women residing in Japan have long had a list of commonly loathed characters.  Topping the list has usually been the white guy who isn’t even good looking who they saw with the cute local lady at the train station last week. Indeed, the sight of a dorky, weedy, pasty guy doing well for himself can really rile a sex-starved woman up. A common heroine, on the other hand, has been pretty hard to find.  That all changed, however, with the arrival of Miranda Kerr on the modelling scene in Japan.

Kerr, with her dazzling smile and honey-brown locks, has been able to sweep all before her, landing juicy contracts and brushing local stars such as Yuri Ebihara to one side during her recent tour.  Davo Michaelson, Kerr’s spokesperson, took time out from checking the protein levels in his turds and spoke exclusively to The Wanko.  “Miranda wasn’t aware of the significance of upstaging a Japanese woman until she started getting e-mails of gratitude from western women in Japan.” 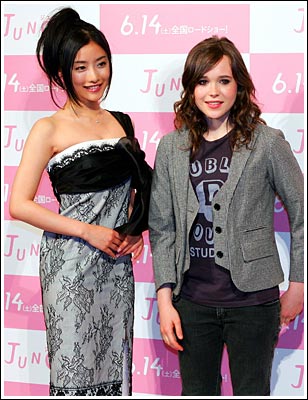 Ellen attempts a smile while local actress Satomi Ishihara captures hearts at the Juno promotion in 2008.

It turns out that it’s not only white women residing in Japan who are reacting with glee at Miranda`s triumph. “She got an e-mail from Juno actress Ellen Page who apparently was on the receiving end of some Japanese glamor a few years ago.  Well, Ellen`s been taking a vicarious delight in what’s unfolding, and she’s even made an offer to take Miranda out for a romantic evening when she’s in Sydney next.  It’s unlikely that Miranda will take her up on the offer though, mainly because she prefers really rich people who have penises.”

Indicating that he had to get back to his protein assessment (“Those turds won’t analyze themselves.”), Michaelson was keen to leave us in no doubt that he was happy with the bond being created between Ms Kerr and her new fans.  “We at Team Miranda are constantly worried that women see her as little more than a mannequin with a pulse.  Therefore, we’re over the moon that she’s seen as a representative for any group of women, albeit such a sad and bitter bunch in this case.”