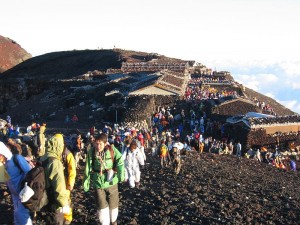 Sunrise on Fuji – a shared experience

Mt Fuji, or Fujisan as it’s known to the locals, lies on the border of Yamanashi Prefecture and Shizuoka Prefecture.  It’s over 3000 metres high.  In order to climb it, one must set aside at least two days, arrange transportation, and prepare comfortable all-weather hiking clothes and equipment.  One must take a bus along a crowded country road.  Then it`s a matter of joining a snake-like line of people which zigzags painfully slowly up the mountain.  Climbers (hikers?) may suffer sunburn, windburn, significant chafing, dehydration, altitude sickness, or sickness resulting from exposure.  If that’s not enough, at least once a year some unlucky punter gets taken out by falling rocks.  Upon reaching the summit, the view of the Kanto Plain may be breath-taking, or obscured by cloud.  Then it’s time to begin the descent.  Once again you`ll move at a snail’s pace, and you’ll soon start to feel your knees ache.  Many people have trouble walking for a week after the climb.

What’s that?  You’re still reading this article?  You haven’t leapt up to start packing to experience the thrill of Fuji?  Well, I’m not surprised. Every year thousands of people, both Japanese and foreign, put themselves through the Fuji Endurance Test.  And for what?  A view of a cloud shadow?  To look down on a flying plane?  To tell their friends about it?  To “find themselves”?  (And for those of you who hope to have some kind of Buddhist awakening on the summit at sunrise – even the Dalai Lama is laughing at you.)

I’m prepared to cut the locals a little slack on this one for the time being.  It’s their mountain.  Many live in its shadow, and many are also known to kill themselves in its shadow.  They’re free to enjoy it (both the living and the dying).  And they’re the ones who have to pick up the litter from its slopes.  For the foreigners though, let’s get down to brass tacks.

Last year I made a bet with Japan Wanko associate, Ben Torbocks.  I wagered 5000 yen that the majority of foreigners who were climbing Mt Fuji hadn`t been to their own country’s equivalent landmark.  That is to say, the Australians hadn`t climbed Uluru, the English hadn`t hiked along Hadrian’s Wall, and the New Zealanders hadn’t visited… whatever it is that they have down there.

I won the bet, although it turned out to be a hard earned 5000 yen; I got sunburnt whilst interviewing people as they returned to the carpark.  But my point was proved.  78.62% of the people that I surveyed admitted that they hadn’t been to places of major importance in their own countries.

So what can we learn from this statistic?  Is it that Fuji is in Japan so therefore it’s more interesting than the Rocky Mountains?  Or perhaps the bragging rights attached to the climb are worth more than doing the same thing back home.  My guess is that climbing Fuji is either a “must do” activity for young westerners visiting Japan, or it is simply for those who prefer a logistically easier challenge than tackling the likes of Kilimanjaro.  At any rate, I’m sure the guy selling the “My brother climbed Mt Fuji and all I got…” T-shirts is enjoying having his mortgage paid for by foreign travelers.

In addition to the aforementioned common concerns, both Japanese and foreigners may also want to consider the spiritual harm that they would be committing just by setting foot on the slopes of Mt Fuji.  The Children of Fuji Protectorate Church, which houses itself in Yamanashi, believes that a huge pigeon-toed beast called Gorimakitara has been asleep inside the Fuji volcano for hundreds of years.  According to their gospel, Gorimakitara might one day waken from slumber due to the large number of footsteps echoing inside the volcano.

The church believes that the sleeping Gorimakitara has a calming influence over Japan, resulting in a society of relative safety and harmony.  Were Gorimakitara to wake, a wave of anger and aggression would wash over the islands.  So rather than the passive-aggression that can be witnessed on the streets of Tokyo today, we’d be seeing a lot of naked disrespect and a rise in irrational feelings of entitlement.  With the widespread drinking culture in Japan, there are fears that Friday and Saturday nights would see mindless drunken violence on the scale of Glasgow, Sydney and Auckland.  Imagine, if you will, scenes of intoxicated patrons assaulting each other with their yakitori skewers;  or how about inebriated commuters brawling in puddles of vomit on the last trains out of the city.  Isn’t it time that those people climbing Fuji realised that Tokyo is indeed a powder keg, and Gorimakitara is sleeping with a zippo lighter by his side.

Some 40 people attend The Children of Fuji Protectorate Church regularly.  (Many others have attended just one service before putting a firm hand on their wallets and bolting.)  For years the church has been asking people to refrain from climbing Mt Fuji.  Their efforts to let their beloved Gorimakitara sleep in peace have had minimal success, as people continue to stomp the slopes, ignorant to the dangerous consequences which Japan could experience.

I’ve no doubt that most Fuji climbers will pay little attention to these paragraphs that I have written.  Some may think these are the words of a cantankerous old fart.  Well, this old fart will be enjoying Fuji this summer from where it is best appreciated – from afar.  I’ll be sitting in an Izu ryokan, or Japanese style hotel, sipping fine sake with a yukata clad lady.  I must stress one point to climbers though; please take utmost care not to die on Fuji.  The locals consider that a gross act of shame, second only to returning from a lost battle.