Now that it seems that Kanto residents won’t, after all, have to flee from fast approaching radiation clouds promising violent nausea, horrible deaths and future mutant offspring, perhaps the time has now come for us to look back objectively at those days in mid-March 2011. 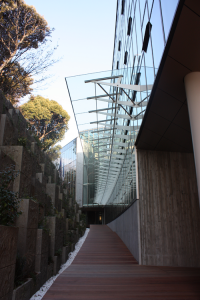 As a long term resident of Tokyo, I took it on myself to use those trying times, err… few days, as an opportunity to see how well embassies responded to the crisis.  As we all know, the general outside view of diplomatic life in Tokyo is one of barbeques, wine parties and orgies involving Ambassadors’ debauched daughters.  Therefore I was keen to see how these pampered people would perform when the heat was on.  With the ongoing Wikileaks scandal in mind, it was the area of security that most interested me.  To this end, I devised a few simple, but mischievous, pranks to play in order to determine whether security was being maintained.

Now, my old university chums will recall how I used to shimmy up drainpipes to sneak into my Professors’ offices where I would defecate on their desks (If my dear Profs Schofield and Ginn are reading this – yes, it was me).  But with my face too easily recognized, I decided to use a hired gun this time.  I dispatched the immensely talented and popular Japan Wanko associate, Ben Torbocks.  Ben was given simple instructions; wreak a little bit of havoc about the place.

So how did the embassies of Tokyo perform?  Remarkably well for the most part.  Ben was caught trying to run a plastic American flag up the Canadian Embassy flagpole.  He was manhandled out of the German Embassy after attempting to use duct tape to divide the embassy into Cold War style quarters.  He was also nabbed sticking a quote bubble onto Queen Elizabeth II’s portrait in the British Embassy.  The quote read, “One would prefer to spend one`s autumn years in a nice colony such as Canada or New Zealand.  But I have to make do living out my days in ghastly old England.”

The ever enthusiastic Ben was not caught, however, on his excursions to the French Embassy.  His first success was modest.  “I nonchalantly asked about a picture on the wall.  It was a Gaugin, and the Embassy Official was a Gaugin fan.  As he explained the history of the painting, he turned to face it.  That was when I took the opportunity to steal two large escargot from their special tank.  I couldn’t believe how simple it was (to steal the escargot).  I was then faced with a dilemma; they were definitely top quality escargot but selling them on at a profit would compromise my high journalistic standards.”  Torbocks decided that the easiest thing to do was to throw the escargot onto the road, where they were immediately run over by a passing bus.

That security breach was just the tip of the iceberg.  Torbocks was to discover just how easy it was to take anything that wasn’t bolted down.  “I went back again and gained access to the kitchen.  I made my way straight to the utensils and quickly found the foei gras cutter.  I just popped it down my pants and went home.  I later discovered that according to the French Constitution, the Ambassador must eat foei gras every Wednesday at lunch.  Of course, without the cutter this wouldn’t be possible.  I didn’t want to be responsible for someone getting the guillotine, so I sent the cutter back by courier the next day.”

By this time Torbocks realized that he could get away with anything at the embassy, so he decided to go back one last time.  “All but two staff members had fled, so I was faced with an embarrassment of choices.  In the end, I plucked out a few pubic hairs and tied them together around a Sylvie Vartan CD which was lying by the stereo.”

We decided to stop with a 3 from 3 success rate with the French Embassy.  We contacted the embassy to inform them of their security problems the day after the Vartan-pubic hair episode.  We spoke to an officer who was at first very courteous, but when we provided the basic details of the breaches, he terminated the call.