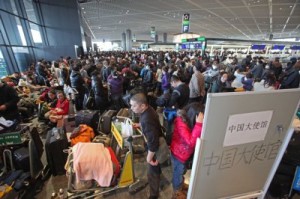 At a time when so many people have cited “family concerns” for leaving Tokyo, one American has put his hand up to admit that he returned to America because he was scared.

Ted Earle spoke with refreshing honesty via skype from his parents` home in Washington State, USA. “I really thought that the shit was hitting the fan.  I thought it was the end of Japan as a civilized society”, said the 28 year old.  “But my parents told me that they trusted me and that it was my decision (to stay or flee).  They never begged me to return or anything like that.”

Ted’s words are a breath of fresh air at a time when it seems that very few foreigners are prepared to say that they were just concerned about saving their own skin, and getting out of town as quickly as they could.  Indeed, people who were well into their 30’s, who had perhaps never listened to their parents, suddenly started packing their bags – not because they thought death was approaching faster than the Nozomi Shinkansen – but apparently because their families were worried about them.

Earle emphasized that he was not prepared to be a hero. “I won`t even try to bullshit you.  I wet my pants and fled Tokyo.  I didn’t trust the government’s information or the media reports.  So I decided to take the logical step.”