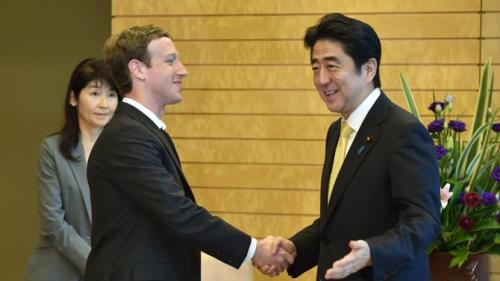 Zuckerberg assumes Abe needs him to get the youth vote, not realizing that such a thing doesn`t exist in Japan.

The Japanese Government today announced plans to form a foreign policy during the 2015 calendar year.  The move comes after years of adopting hollow positions on just about everything, where official statements have meant little more than saying, “It`s a difficult situation,” and,”We need to think carefully about this.”

The ruling Liberal Democratic Party, which is dominated by older men who quite possibly spent a tremendous amount of time during their teenage years pleasuring themselves with their sisters` knickers, has shown great enthusiasm for the unexpected move.

“We`ll be taking the lead on various global issues,” stated Assistant Under Secretary Tetsuya Morimoto.  “And we may even adopt positions which are at odds with the USA.  If that`s the case, then so be it.”

Morimoto then quickly added, “Obviously, this kind of thing would be rare, and the issue wouldn`t be a major one either.”