December 2013 was a time of great excitement in Japan.  People throughout the country rejoiced following the UNESCO announcement in Baku, Azerbaijan that Washoku would be registered as an Intangible Cultural Heritage.  The unique cuisine of the archipelago finally entered the Premier League of world cuisine, alongside the French and Italian dishes.  However, on inspection of the fineprint, it has been discovered that the listing isn’t all-encompassing as many first thought.

Yakisoba-pan. We’ll let you add the adjectives yourself.

The Heritage listing of Japanese food, which actually means diddly-squat, was decided by a panel of freshly blown bureaucrats after tense negotiations with an unnamed member of Prime Minister Abe’s cabinet.  It appears that the panel had already decided in favor of the heritage listing, with the understanding that yakisoba-pan would remain off the list.  Despite the cabinet member’s repeated insistence that yakisoba-pan was “delicious”, the panel stood firm and referred to the key reasons why Japanese food was under consideration in the first place.

Esthetically pleasing and fresh. It`s thumbs up for sushi.

According to 49 year old panelist, New Zealander Aden Greatbatch, yakisoba-pan was dismissed “more or less at first sight”.  The panel had identified two areas of criteria that were then evaluated; the esthetic presentation of dishes, and the freshness of the dishes. “Yakisoba-pan failed miserably in both categories,” explained Greatbatch.  “Just look at it.  Noodles set in a bun.  It’s the oriental version of every 10 year olds` special creation; the spaghetti sandwich.  But it’s available on the shelf in Japan.  That’s just wrong! 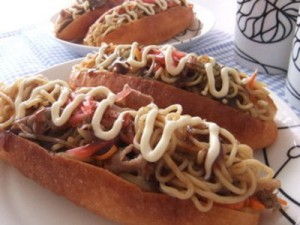 Disturbing to view and preserved for the ages. We’d rather dine on a tic-tac.