SMAP left to right: Shingo, Kimutaku, Nakai, Kusanagi, and Goro at the back on the right, trying to put some character into his pose

It`s a question that`s been asked time and time again over the last decade; when will SMAP go their separate ways? The five members of SMAP have spent a great deal of time together; entertaining Japan through cooking, dancing, trying to sing, and sucking up to Michael Jackson and the rest of the Jackson family. In fact, much like the members of The Beatles and Monty Python, they will always be regarded as members of the group, even if they were to split.

And so, if they ever did split, what would they do? Nakai would finally stop inflicting aural torture on the nation by stopping singing and focusing on his MC work. Kusanagi would be free to pursue some kind of Japanese-Korean love-in for middle-aged women. Shingo could go off and become the cooking show lardo that he`s always threatened to become. Kimutaku just might let himself go and fraternize with the hordes of women who want a piece of him. And Goro? And Goro… 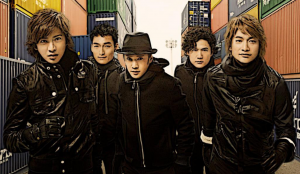 Goro in his usual position at the back

Veteran music critic, Kenta Kii, explained the problems facing Goro in his post-SMAP career, “There is very little support for Goro at SMAP concerts. On the one occasion when we`ve spotted a small group of enthusiastic Goro banner wavers, they turned out to be his relatives. Goro had actually given them free tickets to all the shows, but they could only be bothered to turn up once. They looked really self-conscious too, like the uncool girl in class with the Goofy strap on her bag.”

Part of the problem stems from the lack of a clearly defined role for Goro in SMAP. While Nakai is the MC, Shingo plays the classic boy-next-door, with Kimutaku being the cool one. Goro can`t even be the one most likely to be homosexual, as that turf was staked out by Kusanagi years ago. Indeed, sources close to the group acknowledge that a heated exchange between Kusanagi and Goro took place after the latter went too far in gaying up his wardrobe. “Goro had just started presenting the synchronized swimming tournament. Kusanagi sensed that Goro was trying to outflank him in the light-footed department,” said Kii.

But it`s not only Kusanagi who has had words with Goro. Kii recalled a nasty post-filming incident when Kimutaku let Goro know that a line had been crossed. “Goro was filmed winking at the camera during a song & dance number. Now, everyone knows that the wink is Kimutaku`s thing, and he gave Goro the blowdryer treatment. He really hurt Goro when he pointed out the tiny number of major TV roles that Goro had landed. When Goro retorted that Kimutaka`s TV dramas were boring, Kimutaka replied, “Yes – but at least my characters have balls.”  Kimutaku then advised him to come up with his own little predictable shtick which would be endearing to single 40 year old women.” 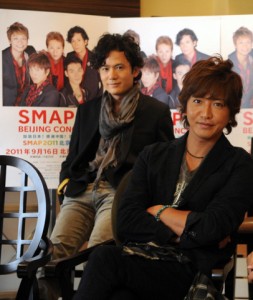 Kimutaku at the front. Goro in the background

And that`s where Goro`s headaches begin. According to Kii, SMAP`s manager tried to persuade him to adopt an LA gang sign, and flash that during each song.  Super tanning, facial hair, and body building are other “Hail Mary” options which have been put on the table.   Given that Goro`s favorite pastimes are listed as drinking chardonnay, playing petanque, and wearing scarves, it`s perhaps understandable that his reaction to the suggestions has been lukewarm.

These are indeed troubling times for Goro. For when the big split comes, it looks increasingly likely that he will drop out of showbusiness, or simply don a knitted vest and go “full banal” with an occasional gig on mid-morning TV.