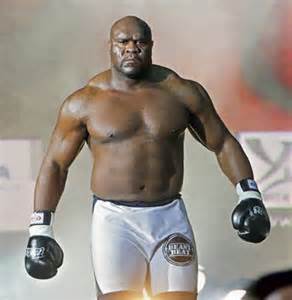 If you’re one of those who think of Bob Sapp merely as a big guy with a huge penis who fights, please stop reading this now.  Sapp has spent too long fighting against narrow-minded Inner-City lefties who spend their days making contemptous comments about him and people of his type.  Or then again, do yourself a favor, and pick up a copy of this book and learn about the real Bob Sapp.

It’s hard to believe that it’s been five years since the release of Mick Hardwick’s “Sailing a Battleship Up a Creek – Bob Sapp’s Japan Days”, the book that sent shockwaves through the foreign community in Japan.  At the time, the book was the main topic of conversation in The Hub and Heartland.  For those who saw Sapp as a progressive character who was committed to breaking down barriers, the revelation of the now infamous “penile outline clause” (a clause stating that the volume, but not the content, of Sapp’s lunch box must be made obvious to the viewer) came as a severe let down. 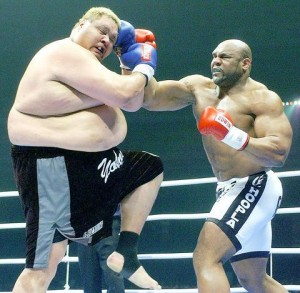 Akebono v Sapp – not exactly the Thriller in Manilla

Working to a deadline tighter than Sapp’s trunks, Hardwick has been able to add two chapters devoted to Sapp’s wilderness years, which began with a ridiculously faked KO in Holland.  Had Sapp not invested wisely while he was making obscene amounts of money, he may have ended up as a homeless man in Yoyogi Park, or as an instructor at GABA, or as a guy-to-go giving middle-aged women a close-up look at what had been barely concealed for all those years.

Despite having his doubters, Sapp has been able to maintain his fitness and enjoy his wealth.  He sleeps on a futon stuffed entirely with 10,000 yen notes, and pops up on TV occasionally for non-speaking roles (unless you consider an earthy “Ha ha ha” as speaking) which he performs in his own inimitable style.

Hardwick has done a good job of assembling a cast of Sapp’s peers who willingly provide commentary on Japan’s most famous American resident.  Perhaps the keenest insider observation involves Sapp’s sparring partner donning a Marshmallow Man suit during training in order to help Sapp prepare for his big fight with Akebono.

The tone reaches somewhat sycophantic levels at times though; does anyone seriously consider Sapp to be “the most important figure in maintaining the US/Japan alliance”?  And what are we to make of one opponent’s claim that Sapp was unable to put his trunks on after popping a viagra the night before a fight.

Crucially, Sapp’s much talked about revolutionary trunks come in for special scrutiny.  For while other biographers have merely scratched the surface, Hardwick puts his finger on why people find them so mesmerizing.  The trunks, which reveal as much as they cover up, are afforded 32 pages (Sapp’s private life is seen off in a mere 27 pages).  This, more than anything,  says a lot about the target audience.  Sadly, the unnecessarily large number of close-up shots of the trunks seems to reinforce the latte sippers’ view of Sapp as just a big guy with a huge knob.

All in all, Hardwick has done a good job shining a light on some of the lesser known characteristics of Sapp, and even though the prose is tinged with a somewhat dry academic tone, as well as the aforementioned sycophantic tone, and a somewhat sensationalistic tone, the book is a quite readable entry into the life and times of a gifted warrior.