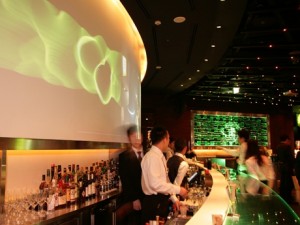 Prior to coming to Japan,  Californian Bryan Wessel had plans.  He intended to let the traditional Japanese culture wash all over him.  Plans can change pretty quickly soon after touching down in Narita though.  Indeed,  seasoned Japan know-alls wouldn’t be surprised to learn that despite having been in Japan for over a year, Wessel is yet to touch his shamisen, play mahjung or practice aikido.  Instead, life in Japan for the 31 year old Investment Banker has turned out to be one incredible sex-a-thon.  Jokes Wessel, “I wanted to build bridges, break down some barriers, build cultural awareness and all that kind of stuff, but…how can I say it diplomatically…  Quite simply, during my first year here I’ve been busy introducing the ladies to my own samurai sword technique, or should that be my pork sword technique! ” *

Wessel spoke candidly about the surprises that Japan has revealed to him. “You know, I always thought there would be a language barrier here in Tokyo.  But the ladies that I know all speak English with confidence.  It`s like they’ve all been on extended homestays at one time or another.  I mentioned to Takako, a sexy 24 year old with cocoa butter skin, that she must have been a great language student; someone who probably sought out the teachers after class regularly to get in a bit of extra practice or some kind of extra-curricular activity.  Strangely, she was silent and avoided eye-contact for a while after I said this.  I don`t know for sure, but perhaps that meant she just didn’t know how to handle praise.

“Japanese women get a bad rap.  People say that they don’t care about anything that happens outside a 5 mile radius of where they are standing at any given moment.  Well, let me tell you that the girls that I’ve fraternized with are really worldly.  They seem to know a lot about Canada, the US, the UK, and Australia.  Hiroko, a 22 year old with almond eyes, even knew a lot about Jamaica.  We didn`t last long though.  I don’t know why but she just didn’t seem to enjoy our sexual encounters.  I imagine that after her previous partners I was a little… a little bit different.”

For Wessel, the lack of naivety among his ladyfriends isn`t the only surprise.  He’s also noticed a rather curious pattern that has emerged.  “It’s really bizarre, but I have a tendency to meet girls just prior to their birthdays.  So far I’ve had relations with four girls who have had birthdays just the next month after we met. There was Hitoe, a 19 year old with a honey silken tongue, Ai, a 29 year old with feather soft pubic hair, and Maki, a 36 year old with labia so sensitive I was reminded of abalone once served to me at an Izu Resort.  Eriko, who had one incredibly tasty bung, actually forgot that she had turned 26 just after we had met.  Two months later she told me that her birthday was coming up.  She went really quiet when I reminded her about the French restaurant where I had taken her.  I think she was embarrassed by the show of memory loss, which probably causes great shame in Japan.”

Unfortunately for Wessel, all four of the birthday girls broke up with him not too long after he had bought them jewelry and treated them to top class restaurants.  Not one to get hung up on past romances, Wessel has moved on quickly.  At the moment he seems to be doing rather well for himself.  “My main woman is Kaori, a 30 year old with a mooky tunnel.  I’ve also got a bit of a casual thing going with Natsumi, a 47 year old with pendulous breasts which she swears used to be akin to fully ripened Wakayama oranges.  Natsumi’s daughter Mariko, a 21 year old with a musk caramel butthole, also likes to keep me satisfied from time to time.  So yeah – I’m doing a mother/daughter combo.  I guess that makes me a bit of a stud, right?  It feels good, although it would be better if either the mother or the daughter were attractive.”

Wessel went on to explain that life for him in Japan was sometimes tough, as he occasionally experiences prejudice.  “Atsuko, an 18 year old with a bitter macha pussy, gave me the clap.  The doctor refused to believe that I had got it from a Japanese person.  Instead, he gave me a stern talking to about bringing in filthy diseases from overseas.”  Stoically, Wessel says that these kind of negative encounters won’t stop him from continuing to break down barriers between Japan and the USA, at least until he runs into a wall of Kyoto Gonorrhea.

Stefhen F.D. Bryan`s  “Black Passenger Yellow Cabs: A Memoir of Exile and Excess in Japan” is available at Amazon