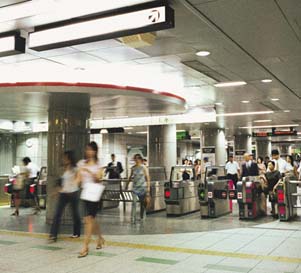 There was disbelief and excitement in spades at Meguro Station when two friends happened to bump into each at about 8:30am yesterday.  The women, both in their mid 30’s, then preceded to go absolutely high-pitched apeshit, asking each other repeatedly, “What are you doing here?” and “What’s going on?”  This was despite knowing that they both used the same station at about the same time every day.

According to Railway Employee, Jun Nakajima, the women then caused a bottleneck by standing directly in front of the ticket barriers.  “They made no attempt to move out of everyone`s way.  If they were aware that they were inconveniencing others, they certainly didn’t show it.”

The inconvenienced commuters didn’t seem to mind, though.  Says Nakajima, “I think most people were just amazed to see two friends actually meeting by chance.  Some even took pictures with their mobile phones.  It all meant that many people were late for work or appointments, but I guess they all judged that the moment was too precious to miss.”

It is understood that the TV Tokyo news room, tired of reporting groping and upskirt photography incidents, is pursuing the story and is prepared to pay for any photographs or footage of the surprise meeting.