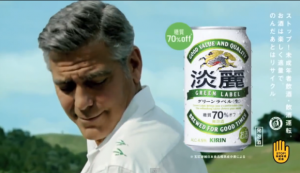 Clooney’s smirk and the beer-like beverage share the stage in this promotional poster.

Major celebrities throughout the world are now reconsidering their personal security arrangements following the surfacing of shocking revelations behind George Clooney’s surprise promotion of a down market beer-like beverage.  Reports of Clooney being abducted in the middle of the night to perform in TV commercials for a Japanese beverage have brought the bold new strategy of aggressive recruitment into the light, although the powers-that-be are still committed to keeping it in the dark.

Stagehand Takehiro Yamaguchi, who spoke to us on the condition that we didn’t print his name, revealed how Clooney was coerced into doing the commercials.  “A lot of people just assume that Clooney purposely showed complete disregard for his carefully cultivated image of a classy human rights activist after he saw a pile of cash on table in his hotel room.  Some people would imagine that George then buried his head in the crisp, smooth, greenbacks and sang, “I me me mine!  I me me mine!”  before adding, “I don’t care what the product is.  You’ve got my endorsement.”  That’s not the case though. 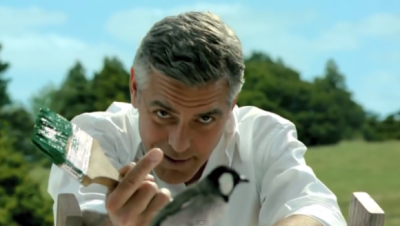 George working hard for his money.

“The truth is that a big scary tough guy waved a big knife in George’s face and threatened to cut him up.  He said, “You’ve got such a pretty face, George.  I’d hate to have to mess it all up.  That would be a real shame, wouldn’t it.”  What choice did George have?  After all, he’s just a guy like you and I.  The fact that he seems to be enjoying himself like a pig in shit in the commercials just shows how well he can act under pressure. ” 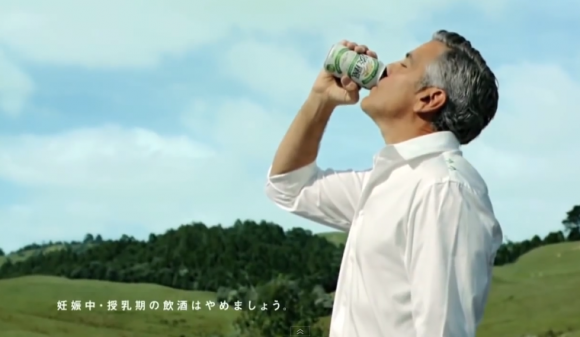 Promoting a beer-like product is tough work, and it requires someone who can keep going until it hurts, and then keep going some more … that’s our George.

Silence from both the beverage company and Clooney’s management has only fueled the speculation surrounding the news.  Social media sites have seen comments from many people throwing scorn on the abduction story, but Yamaguchi says that the proof is there for anyone willing to keep an open mind.  “This product is popular only among chain-smoking poor people who no longer have taste buds.  It’s a complete marketing mismatch to feature Clooney.  If this had really gotten the green light from his management, Clooney would have fired them by now for leading him into a project which has seen his credibility disappear before your very eyes.”