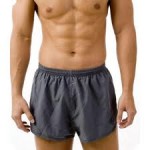 A pair of unsoiled boxers as worn by the author

Literary boffins from around Japan gathered in Tokyo on Friday in an effort to iron out a problem which comes along every once in a while; whether to call dried semen on the front of boxer shorts “pachipachi” or “karikari”.  As far as some people are concerned, the words are interchangeable.  But after a recent controversy in a university entrance examination, it was decided that the gitaigo, or onomatopoeia, would be the subject of an extraordinary vocabulary forum.

Unlike English, Japanese language often lends sounds to feelings, actions and sensations.  Thus a smooth surface can become “surusuru”, or a sticky surface can become “betabeta”.  In the case of dried semen on boxers, the root of the confusion can be found with a cursory glance at the dictionary, which gives the English words of “crisp” and “crunch” for karikari, and “crackle” and “click-clack” for pachipachi.

Given the history of literary and vocabulary debates, many observers expected that the traditional factions of Greater Tokyo and The Rest of Japan would form.  Therefore eyebrows were raised when the composition of opposing sides gave no hint of geographic parochialism.  Instead, professors from Tokyo, Saitama, Kyoto, Aomori, Tottori, Kagoshima, Wakayama and Gifu came together to form the pachipachi team.  They faced the karikari team consisting of professors from Mie, Osaka, Hokkaido, Oita and Niigata.

Both sides started with objective, rational speeches focusing on the etymology of the respective words.  However, it wasn’t long before emotion entered the debate.  Mie’s Professor Kentaro Terauchi spoke passionately by imploring opponents to recognize the cultural and historical significance of the word, “karikari”, in the cattle farming districts.  “For years Tokyo has told us what we should teach our children.  But what about the vocabulary which has been used for generations by farmers’ wives out on the farms.”  His argument was met with a firm rebuttle from Professor Hidemasa Araki of Saitama, who said that it wasn`t just Mie stock raisers who were flogging off in the fields, but “bored farmers the length of the country”.

Despite the serious subject, the debate was not without its humourous moments.  When Professor Ippei Maeda sheepishly admitted that he had been a chronic onanist in his younger days, he offered a line that his mother had often repeated, “Ippei, what’s going on these days?  Your pajamas are always karikari.”  In response, Professor Masanori Asami managed to unwittingly reveal his disturbing teenage masturbation habits by quoting his mother as saying, “Masanori, do you have any idea why your sister’s knickers have been pachipachi all week ?”  On realizing his Freudian slip, Professor Asami moved to destroy the written minutes of the meeting, before resigning himself to humiliation on realizing that everything said was being recorded and transcribed in real time at another location.

The debate concluded in a stalemate, meaning that both words will now be considered appropriate for describing “fabric which has absorbed a substantial amount of semen, which has since dried and hardened”.  It is generally assumed that the words will be taught to elementary students from next year.  Extra-time for debate was proposed, but dismissed when attendees were reminded that their reservation at a nearby posh French restaurant might have to be cancelled.

As the Professors headed out to dine it became apparent that, with the very attractive waitresses serving Professors Maeda and Asami attentively, the possibility of their tablecloth being rendered pachipachi couldn’t be ruled out.