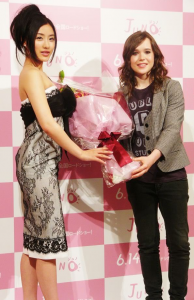 Ishihara and Page at the Juno promotion in Tokyo in 2008

It was back in 2008 when Ellen Page arrived in Japan on a wave of glowing reviews to promote the movie, “Juno”.  She had been called “The Find Of 2008”, “The Year’s Most Promising Newcomer” as well as “A Potential Oscar Winner”.  The trip to Japan was to be a little bit of icing on the cake; eat some sushi, get the ego massaged and answer some innocuous questions from a fawning media.

With TV interviews, in-cinema appearances and tours of Harajuku and Shibuya, things were all going to plan for Page and her minders.  Indeed, Page’s appearance on one Saturday morning TV program saw other segments bumped as a party atmosphere prevailed – something that rarely happens in Japan.  But things then became a little warped during her final promotional event, when she was joined onstage by a young local actress.  For while Ellen had turned up in the typical low key, rapport-building, jeans and top ensemble, with a touch of makeup, her Japanese counterpart, Satomi Ishihara, stepped onstage fresh from the beauty salon, wearing a sexy dress and looking every last cent of a million dollars.

With the very attractive Ishihara now on stage, the assembled media immediately lost interest in both the Canadian actress and the movie she was promoting, with the cameramen literally focusing all their attention on the very fine looking Japanese actress.  Page was left out in the cold, with the look of a star knowing that her parade was being well and truly rained on.

Personal-minder, Renny Benjamin, explained last week just how painful the experience had been for Page.  “She was the star.  She was the one with the hit movie.  She was the flavor of the month.  But then this Ishihara chick rocked up under the pretense of giving Ellen some flowers and ruined the whole trip.  What a load of BS!  She gave her flowers – big deal.  Ellen couldn’t even take them with her.  Her next stop was Australia.  The Japanese knew that the Australians are strict on people carrying flora into their country, so they must have known that the flowers were a logistical problem.  But nooo – they had to have Satomi Ishihara present them in that cute little dress.”

Photos from the event quickly made their way around the world on Facebook and e-mail, often with a slightly humorous  caption or question such as, “Round-Eye or Oriental, which would you choose?”  Answers would invariably come back with expressions of interest in Ishihara only, with many also including derogatory comments about Page. 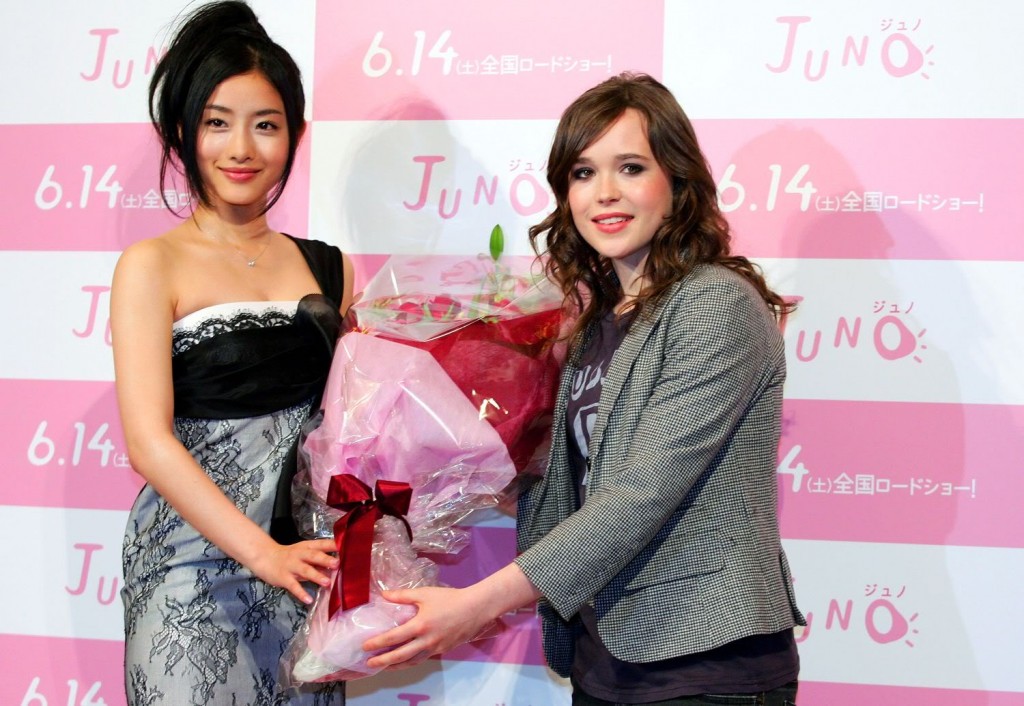 “Has the experience left Ellen with bad feelings towards Japan?  You betcha!” Benjamin continued, “Even though it`s been three years since that incident, she really goes off the deep end if anything like tempura or sushi is served for lunch.  And look out if you dare mention the name, Satomi Ishihara, within earshot.”

According to Benjamin, Ishihara did try to become e-mail buddies with Page after the media event, but Page would simply reply with complex vocabulary and needlessly lengthy sentences, which she knew that Ishihara wouldn`t be able to comprehend.  The only time Page wrote with short, concise sentences was when she purposely recommended a dangerously high-calorie diet.

In public, at least, Page herself remains tight-lipped about the episode, but don`t expect her back in Japan anytime soon.  To minimize the chances of being shown up again, she has decided to restrict her promotional tours to places where contractual obligations such as, “the artist shall go through the charade of being buddies with a local celebrity”, are not par for the course.