Seeing as a lot of Nova teachers and students use to conduct their post-lesson fraternizing in Higashi-Shinjuku, it is perhaps not surprising to learn that the area is now home to the Nova theme izakaya, Level Up. It seems that the old eikaiwa, which folded in spectacular fashion a few years ago, carries a nostalgic sparkle for some punters. 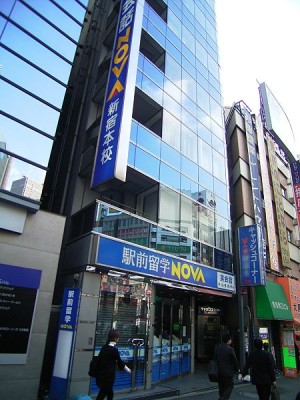 The original Nova – the magic is being recreated at Level Up

On arrival at Level Up, the first thing that grabbed our attention was the way the Japanese waitresses ignored the foreign chefs arriving for work, but then proceeded to go absolutely apeshit when the Japanese customers arrived. I guess after seeing those scenes, I shouldn`t have been so shocked later when a waitress blamed a chef for mucking up the drinks order, even though it had been her fault.

My partner and I were expecting a quiet Monday evening experience, but were amazed to find a number of office workers already seated in the cubicles awaiting the first course. Each cubicle was of similar size to what Nova laughingly used to call “classrooms”, with each cubicle having its own theme. Room 501 (the establishment is on the 5th floor), for example, serves oshinko or pickled vegetables. Room 502 serves yakitori, and Room 503 serves sushi. We received our schedules and waited for the bell to chime. After a 10 minute break, during which nobody interacted, I made my way to Room 504 for some motsunabe. My partner, who had been given a different schedule, went to Room 506 for some Okinawan cuisine.

Over each 40 minute period we were served attentively, but I had to feel for a couple of the chefs. Despite their best efforts to create a jovial atmosphere, a few of my fellow diners preferred to stare down at the table rather than engage in conversation. Some others made an attempt which involved sweating over innocuous questions before giving one word responses.

At first glance the establishment seemed to be in immaculate condition, although that first impression did indeed turn out to be deceiving. We were somewhat disturbed to notice that the cubicle windows were in dire need of cleaning, and I don’t know what had been slaughtered in Room 507, but it had left a hideous stain on the thin carpet.

The standard of food was generally ok, but we became aware that the quality really depends on the chef assigned to your room. The portions weren`t enormous, but all the same my appetite had been satiated by 4 courses by the time I rendezvoused with my partner in the Conversation Lounge. In the lounge we were alternately entertained and bored by a self-styled “Interaction Moderator” who quite possibly has dreams of hosting his own game show (which is a bridge too far for him – he ought to enjoy his time at Level Up).

Just in time for summer, Level Up has introduced a special Saturday all-you-can-drink deal, which has been very popular. Unfortunately, many people who have taken up the offer are being left disappointed when arriving on Saturdays. It turns out that these customers, who have all paid in advance, are being told by sad-faced waitresses that no seats are available. Level Up Manager, Masaya Robashiri, admitted that there were some “teething problems” which were yet to be ironed out. He also seemed to mutter something about reimbursing dissatisfied customers but didn`t actually give any concrete details.

Overall, however, Level Up is a welcoming place for anyone wanting a dining experience served up by foreigners, but without the jet-lag. And ladies, if it’s your birthday, you have the option of being ravished red raw in the Conversation Lounge at the end of the evening by the chef of your choice. Just be sure to choose one who is heterosexual!